In this text you will learn how to consummate bee pollen

Application of pollen:
It is preferable to receive bee pollen one hour before or three hours after meals. The following forms of administration are recommended: 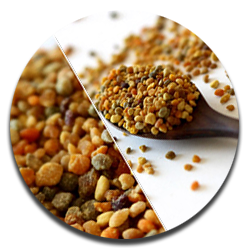 Bee pollen with yogurt :
Teaspoon of pollen is mixed with 3 teaspoons of yoghurt. Allowed to stay overnight and taken in the morning before eating. According to the famous therapist Dr. Stoimir Mladenov, this is the best recipe for quick and complete absorption of pollen from the body.

Pollen with honey:
250 grams of honey and 50 grams of pollen mix well. After a 4-day stay, take one tablespoon, 3 times a day before a meal.
One coffee spoon of bee pollen with a coffee spoon of honey is dissolved in a glass of lukewarm water (200 ml). It is 3 times a day an hour before a meal or three hours after a meal.
In case of inflammation of the prostate gland, 20 grams of pollen and 100 grams of honey dissolved in mineral water (Hissar or Gorna Banya) are taken daily. It is also desirable to add 30-40 drops of clay tincture (30 percent alcoholic propolis extract).

Bee pollen, jelly and honey:
for tonus and strengthening the immune system
A pound of honey, 200 grams of pollen, and 10 grams of royal jelly are mixed in a non-metallic container and confused nicely (making it better for bee pollen to be pre-ground in a coffee grinder, for example, in order to quickly homogenize the mixture). It takes at least 4 days for the pollen to dissolve, at least once a day, the mixture is mixed well. After receiving a homogeneous mixture, take one tablespoon (non-metallic) before meal in the morning and lunch. For young children, one teaspoon is recommended in the morning and afternoon.

Pollen and arteriosclerosis:
For arteriosclerosis, one scoop is taken three times a day for one month. After a one-month pause, the treatment is repeated.
Protector of the intestine?
Fresh bee pollen would also be effective in fighting intestinal inflammatory diseases. The INRA in Toulouse compares the effects of fresh and dried pollen on Crohn’s (type 1) inflammatory bowel disease with rats. In those who took fresh pollen, researchers found 30% less than lesions compared to rats that received pollen placebo. Scientists hope to achieve similar results in further research with humans.

Bee pollen in macular degeneration of the retina:
Pollen can also be effective in preventing macular degeneration of the retina associated with age (MDD), a disease that affects the elderly and affects central vision. This disease, characterized by the formation of layers of dead cells called drups that interfere with the vision of still living cells. Volunteers suffering from MDR have been pollinating for 1-2 years, with some of them drowning completely. These benefits are due to xanthophilic pigments, which are contained in large quantities in pollen.

Bee pollen and menopause:
Studies have shown that pollen can be used to relieve the negative effects of menopause in reducing so-called hot waves. Bee pollen from a meadow timothy enters the ranks of immunotherapeutic drugs against hay fever.

See our other products here

Also in the export of herbs Bulgaria is in first place in Europe! 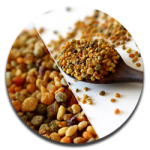 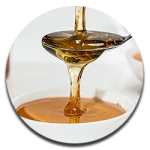 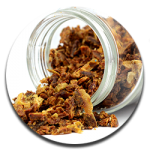